Patricia Doyle | About Patricia Doyle - theatre director and actress.
My current creative work is with Northern Ballet in a feelance capacity as dramaturg and co -director of certain productions, most recently Cleopatra and The Great Gatsby, and as original scenario creator for their new Cinderella.
about patricia doyle, information about patricia doyle
3192
page,page-id-3192,page-template-default,ajax_updown_fade,page_not_loaded, 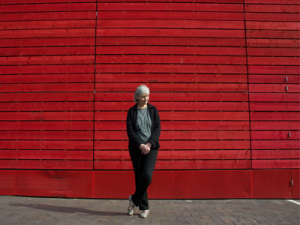 This is a sort of introduction to my career which seems in an extraordinary way to have come full circle.

I began as a young girl in Yorkshire with a wish to be a ballerina, and I had dance classes and went to the ballet at the theatre, and sometimes in the open air in parks. But rehearsing one sunny Saturday afternoon for a ballet school show, Alice in Wonderland, I had a kind of epiphany. I was playing the Cook and peppering the soup when I looked down at the studio floor and saw my ballet shoes, and realised that I wanted to be an actress and not a dancer after all.

So it was school plays, and Titania especially as A Midsummer Night’s Dream followed me through my career and still does, and school competitions for speaking poetry and Latin, and in time and after A levels an audition and training at RADA, where one of my roles as a student was Puck.

My debut was at the Theatre Royal Windsor and then followed seven years of rep., playing as cast before  graduating to being engaged for roles. Television and film, radio and theatre filled the next few years, along with marriage to the director Donald MacKechnie, a son Angus, almost getting the big film but not quite. Then one day I went to Stratford on Avon to see Peter Brook’s A Midsummer Night’s Dream which changed my life.

About a year later the production went on a World tour and I was cast in it for the next year and a half. Returning to Britain I was at the Royal Court for a short time and then in 1973 went to America to be a founding member with my husband of a new theatre-in-the-round built out of a gymnasium, where the Anglo/American company did lunch time theatre, a new thing then, main house theatre and initially schools theatre as well. 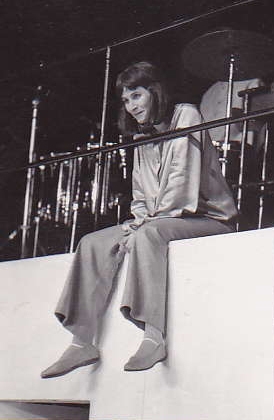 Four years flew by until the Biennial arrived in 1976 and it was time to come home, leaving a thriving theatre that is still there. Wanting to continue working in the round I went for a while to Peter Cheeseman’s company at Stoke-on Trent, and then to the NT.  I returned to repertory at the Redgrave Theatre in Farnham, with productions which took us to America and Summer schools directing American students. From this experience came a new decision, to convert my experience as an actress into directing, having had such a full life as an actress, and the inspiring work with the NT and RSC, working with the very best. 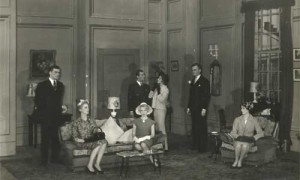 The Circle by W. Somerset Maugham

Leaving the acting behind I embarked on a diverse directing career, professional productions in rep. and on the fringe, Drama school projects and Final productions and pantomimes, as well as founding my own company Terra Firma, and continuing teaching at American Universities. And then it went back to the start.

I had the idea to work with dancers as actors, as my own profession had become very physical, and saw Northern Ballet Theatre in London in their production of Swan Lake. Only one word was used in that production “No!” and that was it. I approached Christopher Gable, Artistic Director of the company after his illustrious career with the Royal Ballet and subsequently as a fine actor on stage, television and film. Fortunately we had a link. Peter Brook’s production of A Midsummer Night’s Dream in which he had played Demetrius in the original production in Stratford which I had seen many years before. I was asked to work with the company and that began a long and continuing association with Northern Ballet as it is now called. This brings me full circle.