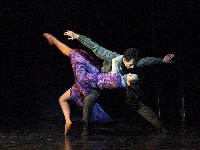 Patricia Doyle’s current creative work is with Northern Ballet in a freelance capacity as dramaturg and co -director of certain productions, most recently Cleopatra and The Great Gatsby, and as original scenario creator for their new Cinderella.

Patricia also works with the company directing scene work as professional development, and with the students at the Central School of Ballet. This has been a long and happy association in the world of dance, and has in some respect taken her away from her first love which is theatre. But it is such a privilege for Patricia to work with this company in this way and to be a part of the research and improvisation that makes up a great deal of the preparation for all new work.

Patricia is a theatre director too and, at this later stage in her career, have directed two short films and she is about to begin work on an idea for television. There is an urge to continue to act too, and particularly to work in radio again.